skip to main | skip to sidebar

Fire & Ice just put out a real fucking barnburner in Not of this Earth.

Yeah, good luck putting this jam on full volume and not just moshing the shit out of your car on the drive to work. It's like, sometimes I wish my windows weren't so tinted so that people can see me slam dancing and finger-pointing in my ride at 7:20 am.

No kidding, two Mondays ago, I two-stepped all the way from my car in the parking lot to my cubicle.

And yeah, that included me going through the security line at the office.

Have you ever seen an asshole with a great haircut just spinkick though the metal detector at work? Well, in an office of about a thousand, many did. And many lol'd.


I love this album.

Half an hour of upbeat, super dancey kinda hardcore, what more do you want? While a couple of the songs feature some great, non-traditionally hardcore riffs, even the more standard hardcore-styled guitar-work found on the rest of the songs manages to keep things interesting. On one of their previous releases, they incorporated a less distorted guitar and I like that they're not afraid to do things a little differently. Not sure if that was on purpose or due to recording limitations, but I would have loved to hear some of that on this new one.

But don't worry, even though these dudes are from Virginia, they sound like they could be mashing skulls in New York with the Cro-Mags.

Really the only bummer here is that sometimes the vocal patterns and lines are kind of corny, but everything is honestly just too catchy to sweat. But mega-ultra bonus points for the vocalist using the mosh call out, "SOCK IT TO ME!" in the third track, Helpless.


I don't know, I've been jocking Reaper Records pretty hard lately - this might become a weekly HUMP DAY PUMP UP for a couple weeks, cause they put out some great records that I've been PUMPing pretty hard.

But what about you? You don't care about a bunch of twenty something dudes yelling at you through your speakers. That's cool. But I bet you do care about having an awesome rest of the week and I'm going to eat so much corned beef and cabbage and carrots this week HOLY CRAP I'M PUMPED!
Posted by heck yeah, man at 6:42 AM 0 comments

So I voted for Barack Obama

And I'm really glad I did.

I don't know, but I think it would be really fun to be around you while you are getting stoned. But literally, stoned.

Or not even to death. Just people stoning you would be sweet.

Next week, maybe we'll visit the glorious idea of you getting tore up from the floor up. Literally tore up.

i just got really hungry

From the author(s) of the "WOULD*" and "PTF", comes another great maxim! Yep, we are now saying:

"Wow, I just got really hungry."

But before we get into the suggested usage, let's quickly review our (my) deep tradition of witty sayings...that continually find new and clever ways to degrade women. Note that egregiously degrading women isn't something that is encouraged and should be done sparingly (think: racist jokes).

Take a look at our previous forays into the misogyny game: WOULD, as in WOULD POUND, and PTF, as in PAY TO Fyou know - this one is sometimes even accompanied by a dollar value lol. T

But we'll keep it strictly catchphrase here, folks. Let's get it into it.

"Wow, I just got really hungry."

What does that even mean, and why would you even say that to a woman? Or your tightest bros? I mean, yeah, I say it to my wife all the time. And newsflash, I HAIN'T TALKIN' ABOUT FOOD.

NOMNOMNOM, ya smell me.

So the next time you see a good looking broad, instead of saying something stupid and unremarkable like, "heh that slut is hot", say " WOW, I JUST GOT REALLY HUNGRY."

And see where it takes you. See how impressed your friends are with your sharp commentary. Say it to your spouse and marvel as he or she becomes instantly impressed with your altiloquent appreciation.

Say it to your mom and revel in her taking it literally and immediately heading to the kitchen to whip up some delicious poached eggs and bacon.

*I can't take full credit for WOULD as I'm sure people were already saying it. But I'm going to go ahead and take partial credit for the purpose of this post. #GetHungry
Posted by heck yeah, man at 8:54 PM 0 comments

a few snippets from a first date

True story, while tub(esteak)ing down the river with a couple near 'n dear friends, they all made heartfelt appeals for me to fire this junk back up. Well, except for ***, he said my writing sucks and this blog isn't very funny.

Funny how I DROWNED HIS FUCKING ASS FOR TALKING SHIT.

Anyway, I think they were right; here I am, watching The Bachelorette and putting together this COMEBACK post.

Read on if you want to read a crappy little disjointed narrative of a couple we spied on a first date.

Picture this, pussies: Heckyeahwoman and I. I and Heckyeahwoman. Out on a dinner date at some kinda sketchy Chinese restaurant. Grouponing the shit outta that place. Now picture us going to the neighborhood dive bar afterward to get a couple beers cause it's nice as shit out.

Like I said, it was nice out, and the shitty patio there was calling our names.

So Heckyeahwoman led the way to a table at the end, kinda close to this couple that appeared to be on their first date. Kinda douchey looking, poorly dressed, lanky dudebro with a pretty blonde slore. Odd couple.

First thing that caught my attention was his exclamation that "this shirt is covered with cat hair!" as he brushed, uh, cat hair off his ugly maroon striped, kinda shiny shirt.

Unfortunately his date had her back to us, so we couldn't see her grimace.

After about ten minutes of me trying to talk my way into my own date's pants, an unexpected un-amorous oddity appeared in the form of really fucking greasy fingers.

Yeah, the waitress brought out their orders, a burger apiece. And immediately they both just went to town on them. I've never seen a couple eat burgers so hard. Def kinda got a little chub. But then the waitress came back to check on things and two (2) mouthfuls of food assured her things were fine.

But then it happened.

Duder flags down the waitress with probably the greasiest fingers and hands I have ever seen. He is waving her down with the shiniest, wettest mandibles ever. Like, it is totally plausible that before the date he soaked his hands in baby oil. For a good couple hours. Ladies and gentlemen, this man's hands were GLISTENIN'.

So yeah, anyway, he gets the attention of the waitress, and in one of the most unpimp moves ever, he tells her that his burger didn't come with any bacon, and he "really hopes he doesn't get charged for it".

The greasy, glistening hands, the genuine fear of getting charged for the bacon that never came, the horrible outfit. It was the perfect storm of my pity for this guy.

Turns out they weren't even on a date, first or otherwise. Yeah, it was a purely platonic shitdinner between friends. How do I know this? Towards the end of the date, the dude made multiple mentions of his boyfriend.

So I guess it's not that bad; he was only an asshole in front of a friend, not like, somebody that matters.
Posted by heck yeah, man at 6:39 PM 0 comments

Lil Wayne went to see a basketball game. Turns out, the seats he thought he was entitled to were already taken!

So he got butthurt and pouted to ESPN.

But for real, if I was in the seat-filling business, I wouldn't want my paying customers to have to sit next to him either. 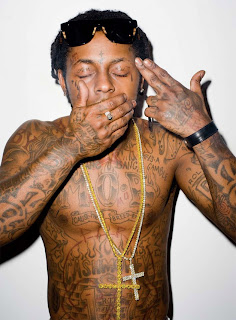 People are starving, getting furiously slaughtered overseas, and Lil Wayne makes headlines by feeling unwanted at a basketball game.

Not only should he get flagged for the race card fail, but he apparently tried to play the celebrity card by thinking he deserves the seats that were already sold out. Already sold to someone else.

Then he went on to say that at his concerts, he deprives his loyal, paying fans of his best performances until he spots a fellow celeb in the crowd. In which case, then it's OK for him perform a little harder.

Lil Wayne is the reason people are racist.
Posted by heck yeah, man at 8:30 PM 0 comments

tall man on the loose in tampa area

True story, there is a tall man terrorizing the Tampa area. This weirdo usually hangs out around parks, trying to find pick-up games of basketball - during which, he will grab the ball and maneuver around so that you come into contact with his stinky, naughty bits.

His signature move is the "bait and switch junk grab". As you're grabbing for the ball, his junk magically appears. In the way of your hand.

Another one of his famous moves is to let the ball go loose, then as you scramble for it, his sweaty ass gets in the way. Of your face.